Pluto is the faithful dog of Mickey Mouse and is named after a planet. Personally I think it’s more a dog name than the name of a planet in the universe :). Although he can not speak, he usually knows how to make himself clear with his barking and expressions. I guess he could talk in one of the first cartoons he was in, but that’s a very long time ago. Nowadays he can just bark, like a real dog.

Like all other dogs he loves collecting and chewing on bones. And of course he loves to hide these bones by digging a hole in the ground and put them in there. He does this to save them for another day. Pluto has his own doghouse, but he’s mostly also welcome inside the house of Mickey Mouse. But, when he has been naughty or mischievous, there’s a chance he has to sleep outside in his doghouse. Then it’s a good thing he hid some bones nearby his doghouse.

This great dog is loved by everyone, maybe that’s why he also has a role in the Disney Mickey Mouse Clubhouse with friends like Mickey Mouse, Donald Duck, Goofy, Minnie Mouse and Daisy Duck. Of course his appearance in this show can also be because he is Mickey Mouse’s pet. Because kids also love him, we’ve placed a lot of Pluto coloring pages for kids to color in.

There are many coloring pages to choose from, so pick out the best one(s) you like. Maybe when you’re done with coloring in, you can try to draw your own coloring page. How? You can find it out in our Drawing section. And of course we offer a lot more coloring pages from all kind of subjects. Whatever you dicide to do, have lots of fun doing it 🙂

Nice coloring pages from I guess the most famous Disney dog. in the first coloring page he still was a little puppy, in the second he has some visiting birds who’re taking a bath in his water and in the third sheet Pluto has become “bling bling Pluto”. The last coloring page is a one-dog-band who’s giving away a great drum solo.

Pluto loves Easter and is very good with searching (or hiding) eggs as you can see in the coloring pages below. There he’s also flying high in the sky with balloons, doing some gardening in the garden and giving best Christmas wishes as a great Christmas dog.

Below we have some Pluto coloring pages with Pluto who has won the first price with collecting bones and got a medal for this. He also thinks to hear something. Or maybe he has some fleas because he has some itching. Maybe he can take these fleas with him into the circus.

Who will win this battle and own this rock in the first coloring page below? The other coloring pages are from Pluto carrying the olympic flame, a happy Pluto and one from him who has to sleep in his own doghouse tonight.

Another three coloring pages from Pluto with a koala, loves playing football and being a real bone collector. He even has a map where he saves them.

This is a funny coloring pages with Pluto and some little puppies. I gues these puppies think they’ve found their father. But what is that snail doing there in front of the row? 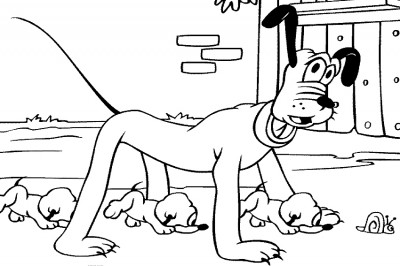 Pluto is running very fast, because he has to deliver a present. He looks like the roadrunner as fast as he goes.

Just another coloring page. It looks like he’s very careful because he sees something he does not know yet

What a daydreamer this dog is in this coloring page, but he has to guard the backpacks as a watchdog. There’re schoolbooks in these backpacks, they may not be stolen.