Diego is the main character of one of the most favorite shows on Nick jr, namely Go Diego Go. In this show there’s a little 8 year old boy who’s a big adventurer. In these shows animals in danger are always helped by this boy, named Diego.

Diego is the nephew of Dora the Explorer, from another favorite show for little preschool children on Nick jr. Sometimes they´ll even make a guest appearance in each others shows.

As said, Diego is always on adventure, mostly in the rain forest. On these adventures most of the times there’s an animal in danger who needs to be resqued. Animals who needs to be resqued, can be seen in the rainforest Animal Rescue Center. Diego hears an animal crying for help and he sets out to rescue the animal. Of course with help from his friends, the little nickelodeon viewers at home and some gadgets. Mostly they are accompanied with the song “Go Diego Go”.

The most important characters who are assisting him on his adventures, are his sister Alicia and a little jaguar, called `Baby Jaguar`. To find an animal´s location, Click the Camera is called to zoom in and search for the animal. Diego and Baby Jaguar go to the resque. Alicia directs the animal rescue calls and will help them on their way. Diego is always wearing a bag, called Resque Bag, which can transform into any object which is needed on the way. It’s also very handy that Diego can talk with the animals, this makes the resque a little easier :).

The little nickelodeon viewers are kept very active during the show learning things about animals and even learning the Spanish language (just like with Dora and Boots). At the end of the shows, all the things learned about the animals, will be repeated playfully with a game.

During the shows, some monkeys always cause trouble. These monkeys are called the Bobo Brothers. But, these are friendly monkeys and they don’t cause trouble on purpose, but it mostly happens when they are playing games together. After they’re stopped by Diego and the Nick jr viewers by shouting “Freeze Bobos!”, they’ll always apologize for it.

On the internet you can find a lot of things of Diego, like great wallpapers, images and coloring pages of Diego. Of course there’s also a lot of material from and all the other characters from this great show for pre-schoolers like Alicia, Baby Jaguar, Resque Bag, Click the Camera, the Bobo Brothers and Linda the Lama. In some you’ll also find Dora and Boots. Mostly you can download all these items for free, print them and do with it what you like.

For example, if you’re googling for free diego party supplies, you can print out diego coloring pages and let the kids color them in 🙂

For the parents: you can also surprise your kids with placing a Diego wallpaper as the background for your computer. This is very easy to do, all you need to do is find a great wallpaper you or your children like, download it and set it as your background. You can also set is as your background directly from the internet. It’s also possible, with for example windows 7, to rotate your favorite wallpapers, so you can download more than one wallpaper from Diego. Or from other Nick Jr shows like Dora the Explorer :). 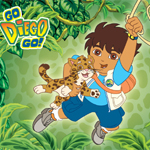