Cars is absolute one of the greatest cartoon movies from the last time. At this time there are three parts of this movies. The cars from these movies can be recognized with that they all have a name, eyes and a mouth. Actually they have the expression on their face as people have. The tyres can be seen as their hands and feet, for example there are made ​​greetings and high fives between cars. There are even ones with tattoos in the movies.

There can be found a lot of merchandice from these Disney movies. From collectible panini stickers and puzzles, to a remote control car for kids (and for their parents :)) and real little cars where kids can play with. These are like those from Matchbox or Hot Wheels. Every toy car that you can buy in the stores also have eyes, but can of course just only drive by giving them a push.

In these Disney movies you’ll find all kind of disney cars, like old cars, racing and classic cars, etc.
I must admit, this subject is more for boys than for girls, but also girls can enjoy watching these movies. Maybe because there’s a little love and romance in it. 🙂

The first movie starts with the introduction of the main character and a great race. After this first race, he kind of falls out of the truc ‘Mack’ who’s supposed to bring him to the next race. This main characters name is Lightning McQueen. McQueen lives for winning races and earning a contract with a major sponsor. Because of this he has no friends, not even a real pit crew. Well, that’s all gonna change in part 1 when he for example meets Mater, Sally, Red, Doc Hudson, Luigi, Ramone, Sheriff and Fillmore. In almost every friendship it starts rough, but eventually they become good friends. Such good friends, that they’ve made a second part of the movie.

In part 2, McQueen and Mater are going to conquer the world, so McQueen can race all over the world against the fastest racers in the racing series called the “World Grand Prix”. One of the best is Francesco who drives in the formula races. This part looks like a James Bond movie, because there’s a lot of espionage in it. Mater will become unknowingly a master spy, together with his new spy friends Finn McMissile and Holly he will experience exciting adventures. Like a real spy movie, there’ll be a lot of shooting and explosions.

Within part 3 of the movie, Lightning McQueen must compete with a new generation of fast racers. You can find more about this third movie right here

Join us in the world of cars by seeing the movies or to find some pictures and coloring pages from these great Cars movies. Below you’ll find links to coloring pages, images, printable Cars games and wallpapers from the Disney movie Cars. 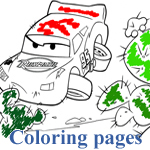 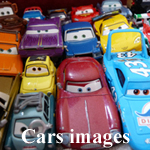 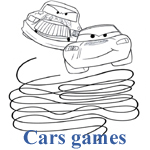 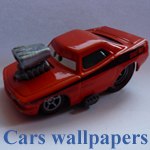