The Angry Birds finally have there own page on Only Kids Only! All these birds with angry faces and most without wings can be seen in some mobile games of them. In these mobile games, players have to launch some birds to destroy some of the pigs shown in the Angry Birds game. Very simple, very fun to do and mostly, very addictive. The further you come, the more abilities you´ll get with new birds. Make them fly back, throw exploding eggs, make a balloon out of a bird or even birds which can explode by themselves.

First there wasn’t a cartoon on television or something like that. It was just a simple game where these birds must pop pigs very fast. But, a cartoon of these great characters has followed soon after the games. This is because I think they look vey funny when they look angy. Just like cartoonish figures :). I don’t know why they are called like that, it’s probably because they look angry and they are birds…..so Angry Birds.

We’ve included these crazy birds on OnlyKidsOnly and posted some printable coloring pages, games and pictures of them to download for free.

Have lots of fun with them and if you don’t know the Angry Birds games, start playing it today and pop those crazy pigs :). 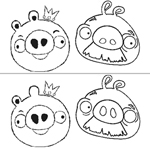 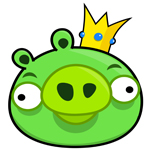